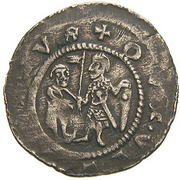 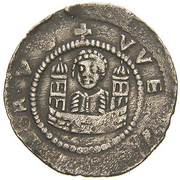 Bohemia chronicler Cosmas noted imprisonment of prominent Jew Jacob Apella by Vladislaus on 22. July 1124. He was later ransomed by jewish community for 840 000 denars and money raised that way was used by duke to free Christian slaves from Jews in the country. One slave costed approximately 300 denars (female slaves costed double, about 600 denars), so Vladislaus freed about 2000 people from slavery. Coins were mostl likely minted from the very silver collected for ransom in second half of 1124.

Vladislaus I (Czech: Vladislav) ruled in difficult times of dynasty strugles. He was Bohemian duke between 1109 - 1117 and then again from 1120 until his death in 1125.

» Buy coins from the Royal mint of Bohemia