20 Centavos 50th. Anniversary of the Republic 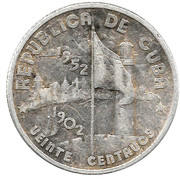 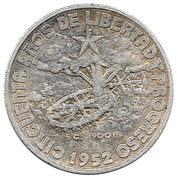 50th Anniversary of the Republic of Cuba

Series: 50th. Anniversary of the Republic of Cuba

"La Demajagua", place where the Cuban Independence war started, and a star.

This elaborated coin shows 2 important landscapes of the Cuban history:

On obverse, fortress of the Morro de Santiago de Cuba (morro = nose or prow, name given by Cubans to a cape or sea point); this fortress is located at Santiago de Cuba city, at center of the south shore of the island.
On right shows enhanced image of the lighthouse of the fortress, and at front a Cuban flag.

On reverse is shown an image of the Arbol de la Demajagua (Demajagua tree). This tree was considered a symbol of the independence, as it growth thru a cannon wheel, debris of the battle fought at that place. The original tree died on 1998 and was replaced with other of the same specie.
On the image is shown a big 5 pointed star, symbol of Cuba, on the tree.

Bullion value: 2.48 USD Search tips
This value is given for information purpose only. It is based on a price of silver at 550 USD/kg. Numista does not buy or sell coins or metal.