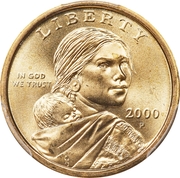 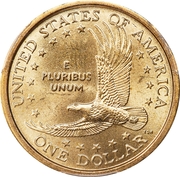 Sacagawea (1788-1812), a Shoshone native American and a translator and guide to the Lewis and Clark expedition, with her son Jean Baptiste Charbonneau and the date to the right

Eagle in flight with the denomination below

Translation:
United States of America
Out of Many
One
TDR
One Dollar

The Sacagawea Dollar proved to be unpopular amongst the American public and are today rarely seen in everyday commerce. However, they are frequently used in Ecuador and El Salvador, two nations that have adopted the United States dollar.

The standard weight of all base-metal dollars issued since 2000 is 125 grains.

► This is the link for the 3 varieties of the 2000 P:
http://coins.about.com/library/US-coin-values/bl-US0100K-2000-Sacagawea-Native-American-Values-Prices.htm
Cheerios dollar: https://www.thespruce.com/cheerios-dollar-profile-768545
Wounded eagle dollar: http://www.pcgscoinfacts.com/Coin/Detail/147883