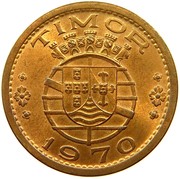 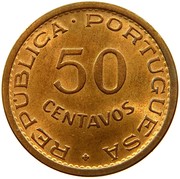 The Coat of Arms of Portuguese Timor

The Coat of Arms of Portuguese Timor:- the territory being represented by the Dominican Cross which is on the right side of the Central shield. The wavy lines represents that Timor is an overseas province of Portugal. Portugal itself is represented on the Coat of Arms by five escutcheons forming a cross (five dots within each of the five squares).