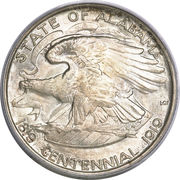 Portraits of William Wyatt Bibb, the first governor of Alabama, and Thomas E. Kilby, the current governor. Twenty-two stars are arranged to each side of the portrait. Some coins were struck with “2X2” in the right field above the stars. Although this was intended to be a scarcer variety, ultimately the number of plain and “2X2” coins were very close.

Lettering:
UNITED STATES OF AMERICA
IN GOD WE TRVST
BIBB 1921 KILBY
HALF DOLLAR

An eagle perched on a shield, which is based on the Alabama State Seal.

Laura Gardin Fraser was an American sculptor and the wife of sculptor James Earle Fraser. Laura Gardin studied under Fraser at the Art Students League of New York from 1910 to 1912.

The 1921 Alabama Centennial Half Dollar celebrated the 100th anniversary of statehood two years after the fact. Also of note, this represented the first U.S. coin to depict a living person.

Authorization for 100,000 of the silver half dollars had been received in May 1920, with the coins to be produced “as soon as practicable.” The design proposal and discussion by Alabama Centennial Commissions Discussion was not concluded until 1921, by then the 102nd anniversary of Alabama’s statehood.

Coins have a "2*2" placed in the field above the date to indicate that Alabama was the 22nd state or star on the flag.

Sales of the 1921 Alabama Centennial Half Dollar began on October 26, 1921, to coincide with President Warren Harding’s visit to Birmingham, Alabama. The coins were distributed through banks for $1 each.