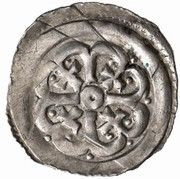 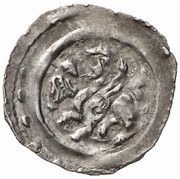 Trefoil with 4 crosses, a ring at centre, dots around the crosses.

Minted in Wiener Neustadt.
Frederick II (1211 – 1246), known as Frederick the Quarrelsome (Friedrich der Streitbare), was Duke of Austria and Styria from 1230 until his death. He was the fifth and last Austrian duke from the House of Babenberg. He was killed in the Battle of the Leitha River, leaving no male heirs.