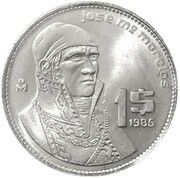 The national emblem of Mexico depicting a Mexican golden eagle perched on a prickly pear cactus devouring a snake above a half-wreath of oak and laurel below and the legend forming the upper semicircle.

Bust of José Morelos in a general's uniform facing right with the mint mark Ṁ to the left, the denomination 1$ to the right with the date below the $, and at the upper right, "josé mª morelos" along the border. 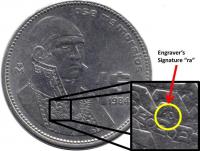