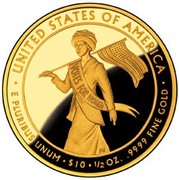 Susan Gamble is a graphic designer and illustrator who studied at the Virginia Commonwealth University School of the Arts.

Alice Paul participating in a marching event within the suffrage movement, carrying an American flag and wearing a banner “Votes for Women”.

Susan Gamble is a graphic designer and illustrator who studied at the Virginia Commonwealth University School of the Arts.

In accordance with the authorizing legislation for the First Spouse Gold Coin Program, a $10 gold coin was issued for Alice Paul and the Suffrage Movement. This issue represented the 21st President Chester Arthur, who served in office without a spouse during a single term from 1881 to 1885.

Alice Paul was a leading strategist in the suffrage movement, which ultimately resulting in women obtaining the right to vote with the adoption of the 19th Amendment to the Constitution. She was born on January 15, 1885, during the Presidential term of President Chester Arthur.

Bullion value: 938.48 USD Search tips
This value is given for information purpose only. It is based on a price of gold at 60 343 USD/kg. Numista does not buy or sell coins or metal.