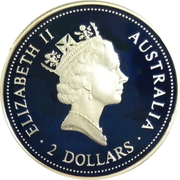 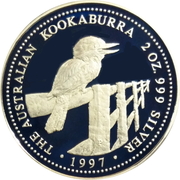 Kookaburra on fence. Some coins have Privy Marks which will be on the right side just above the fence. P mint mark is towards the bottom of the large fence post.

1997 coins are Proof design. 1998 coins are Specimen/Bullion coins of the same design.
The 1997 coins with privy marks celebrate the 60th anniversary of the pre-decimal pattern coins, Penny and Florin (two shillings).
This is an image of the coin with the Florin Privy. 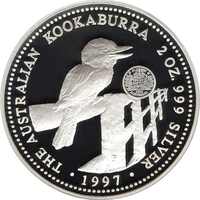 1998 Perth Coin Fair Coin & Medallion Set
This set has been issued as part of a 4 year series to commemorate each of the Perth Coin Fairs from 1997 to the year 2000. The date and designs on the Kookaburra coin will change each year and the medallion will feature different pre-decimal coins on the reverse side with The Perth Mint seal on the obverse. This year's medallion features overlapping reverse and obverse designs of the 1946 Shilling, with reference to the Coin Fair dates and the mintage. The 1946 Shilling was the only pre-decimal silver coin minted by the Perth Mint. The medallion is also 2 oz of  .999 silver. 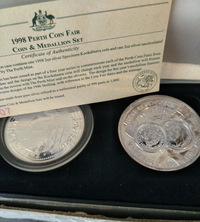 Bullion value: 55.15 USD Search tips
This value is given for information purpose only. It is based on a price of silver at 887 USD/kg. Numista does not buy or sell coins or metal.