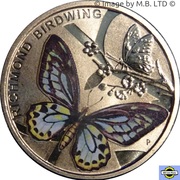 Depiction of a Richmond Birdwing in stunning colour, with a struck butterfly on a flowering bush in the background. The design also includes the inscription RICHMOND BIRDWING and The Perth Mint’s traditional ‘P’ mintmark.