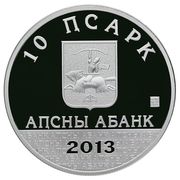 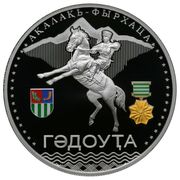 Siver with selected gold-plating coin (Silver 925, Gold 999).
In the upper central part in the mirror field there is a relief image of the Emblem of the Bank of Abkhazia, under it - the inscription in the Abkhaz language «Апсны Абанк», over the Emblem - the semicircular inscription indicating the coin denomination of 10 apsars, on the right - the Mint trade mark with the indication of the metal according to D. I. Mendeleev Periodic System of Elements and the fineness. In the lower part in the matted field and on the relief small print inscriptions in five lines «Апсны Абанк» the year of issue «2013» is indicated.

On the reverse of the coin “Hero-town Gudauta” in the upper part in the mirror field there is a horseman riding a rampant horse with mountain peaks in the backgound. On the right of the image there is a medal “Hero of Abkhazia” and there is the emblem of the town on the left. In the lower part under the decorative line symbolizing the sea, there is an inscription in the Abkhaz language “Гудоута”. A framework of the stars and the inscriptions in the Abkhaz language “Акалакь-афырхаца” are circled along the circumference. The images of the medal and the Emblem are made in colour by pad printing and selected gold-plating.

Bullion value: 26.09 USD Search tips
This value is given for information purpose only. It is based on a price of silver at 831 USD/kg. Numista does not buy or sell coins or metal.