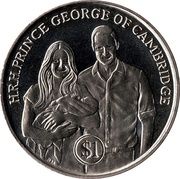 Christening of Prince George of Cambridge

The Duke and Duchess of Cambridge with their newborn son Prince George.

To celebrate the christening of Prince George of Cambridge, on 23rd October 2013, Pobjoy Mint has released a magnificent collector’s coin on behalf of the British Virgin Islands Government .This stunning Uncirculated Cupro Nickel coin captures the moment when their Royal Highnesses, the Duke and Duchess of Cambridge, appeared on the steps of St. Mary’s Hospital London on the 23rd July to present their newborn son to the waiting world. Third in line to the throne, Prince George’s christening was held at the Chapel Royal, St James’ Palace on the 23rd October 2013. Performed by the Archbishop of Canterbury, the Most Reverend Justin Welby,