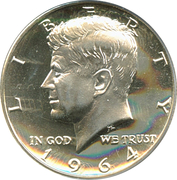 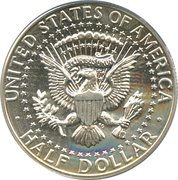 Portrait of John F. Kennedy to the left, date below.

Modified presidential seal of the United States of America: A shield (with vertical stripes) on the chest of an American eagle. The eagle holds an olive branch on its right talon and a bundle of thirteen arrows on its left, and in its beak a scroll with "E PLURIBUS UNUM". A circle of stars surrounds the eagle.

Translation:
United States of America
Out of Many, One
FG
Half Dollar

If there is a mintmark, it is to the left of the stalk of the olive branch in the eagle's right claw.

Gilroy Roberts monogram, which some confuse for a hammer and sickle, appears on the truncation. 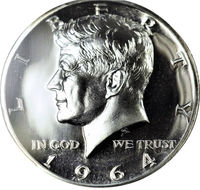 Bullion value: USD 7.65 Search tips
This value is given for information purpose only. It is based on a price of silver at 680 USD/kg. Numista does not buy or sell coins or metal.