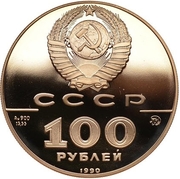 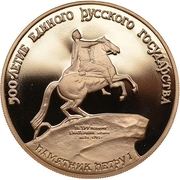 The coat of arms of the Soviet Union; value, date.

Monument to Peter I in St. Petersburg, the Bronze Horseman.

Translation:
The 500 Anniversary of the United Russian State
Monument to Peter I

The Bronze Horseman (Russian: Медный всадник, literally "copper horseman") is an equestrian statue of Peter the Great in Saint Petersburg, Russia. Commissioned by Catherine the Great, it was created by the French sculptor Étienne Maurice Falconet. The name comes from an 1833 poem of the same name by Aleksander Pushkin, which is widely considered one of the most significant works of Russian literature. The statue is now one of the symbols of Saint Petersburg. The statue's pedestal is the enormous Thunder Stone, the largest stone ever moved by humans. The stone originally weighed about 1500 tonnes, and was carved down to 1250 during transportation to its current site.

Bullion value: USD 900.92 Search tips
This value is given for information purpose only. It is based on a price of gold at 57 365 USD/kg. Numista does not buy or sell coins or metal.