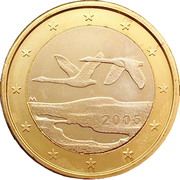 Two flying swans, a design taken from a competition for a coin to commemorate the 80th anniversary of the independence of Finland, are encircled by the twelve stars of Europe

A map, next to the face value, shows the gathering of the 15 states of the European Union 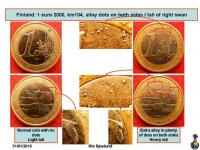