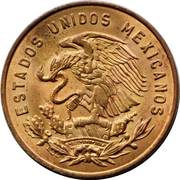 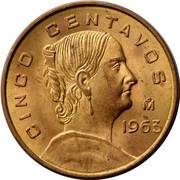 National Arms (Eagle on cactus facing left with snake in beak above wreath), with the inscription forming a semicircle above it

Value, Portrait of Josefa Ortiz de Domínguez to the right.

NOTE: Regarding the 1954 issues, these were minted without proper legislation and most were withdrawn and subsequently replaced with the larger KM#424. Separate mintage figures for 1954 KM#424 and KM#426 are not available. Due to the halting of production and withdrawal from circulation, 1954-dated coins are scarce. There are two varieties, with and without a dot (between the I in CINCO and the base of the hair). 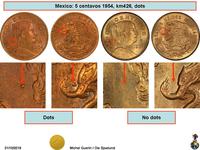