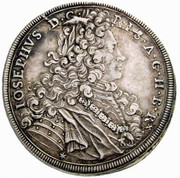 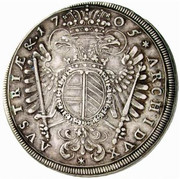 Laureate portrait right in armour, chain of the Golden Fleece. The top of the head divides the legend, no inner circle, 2 circles on the arm on armour. Legend starts 8h. Star below bust for München.

Crowned double headed imperial eagle with arms of Austroa and Burgundy, divided date above, star below for München.

Coinage of the occupation period of Bavaria by the Austrian Imperial troups (1704, battle of Blenheim, 1713, Treaty of Utrecht) due to alliances during the Spanish succession war. Maximilian II Emanuel of Bavaria was then exiled in the Netherlands.