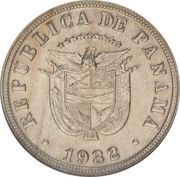 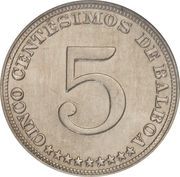 Coat of Arms with 9 stars above. Name of the country around and date below.

Translation:
Republic of Panama
For the Benefit of the World

Value in numeric in the centre, in letters around, 9 stars below.

Translation: Five Centesimos of a Balboa

The arc of 9 stars on reverse represent the 9 provinces of Panamá at that time (today 10).

» Buy coins from Panama at eBay