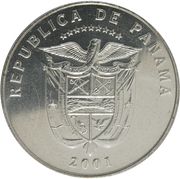 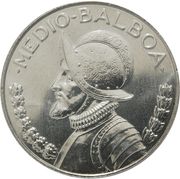 Coat of arms with 9 or 10 stars above. Name of the country above, date below.

Translation:
Republic of Panama
For the Benefit of the World

Armoured bust with helmet of Vasco Núñez de Balboa facing left surrounded by value in letters and wreath. The bust touches the rim below.

Balboa was a Spaniard, first European who crossed the Isthmus, reached the Pacific by land and discovered the Perlas Archipelago (1513). The 9 stars represent the 9 provinces of the country at that time (there are now 10).

» Buy coins from Panama at eBay