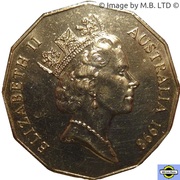 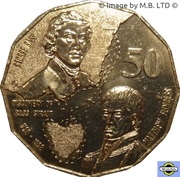 200th Anniversary of the Discovery of Bass Strait

Portraits of Bass and Flinders, a map of part of Australia and all of Tasmania and a depiction of the route they took

The RAM released this coin into general circulation to commemorate the Bicentennial of the discovery of Bass Strait. The coin was included in the Proof & UNC sets & Baby Proof & UNC sets for 1998. 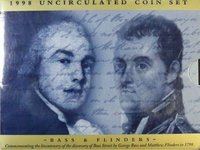 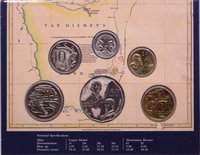 It was also released in a very popular PNC by Australia Post. (82,204 Copies)

3,000 special overprinted copies of the PNC were issued at the Sydney ANDA coin show also.

A special release of the coin was done by Note Printing Australia in a limited set of banknotes and coins. (1,000 Copies) 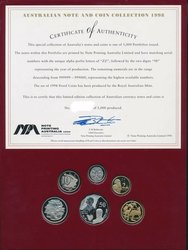 The Bass Strait sits between Australia and Tasmania. Bass & Flinders's expedition proved that Tasmania was an island. During the voyage in 1798 in the sailing boat the "Norfolk", Bass and Flinders circumnavigated the island of Tasmania establishing that it was in fact separated from the main part of Australia. George Bass and Matthew Flinders were leading the expedition. The Strait was named after Bass and an island in the Bass Strait is named after Flinders.