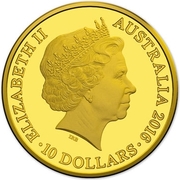 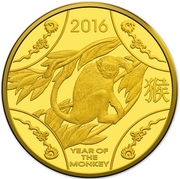 The Royal Australian Mint released the first of this gold proof lunar coin series in 2007. This particular coin depicted the Lunar Monkey of the Chinese Zodiac Calendar and was the tenth coin of the series. The Monkey is the ninth sign of twelve in the Chinese Zodiac Calendar. People born in the "Year of the Goat" are naturally quick witted and good at problem solving. Famous Goats include "Tom Hanks", "Will Smith" & "Yao Ming" Cole.

Bullion value: 193.52 USD Search tips
This value is given for information purpose only. It is based on a price of gold at 62,281 USD/kg. Numista does not buy or sell coins or metal.