2 Euro Radio and Television of Andorra 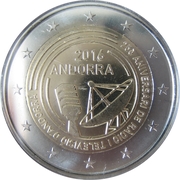 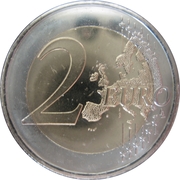 25 years of Radio and Television of Andorra

The design shows a microphone and an antenna circled by several circular lines with the inscription '25è ANIVERSARI DE RÀDIO I TELEVISIÓ D’ANDORRA', the year of issuance '2016' and the name of the State of issuance 'ANDORRA'. This commemorative coin celebrates the 25th anniversary of the establishment of the Andorran public media with the beginning of the broadcast of the Andorran public radio and public television. The coin's outer ring depicts the 12 stars of the European flag.