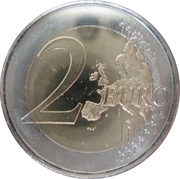 The design shows the main room of 'Casa de la Vall' (premises of the Andorran Parliament) with the inscription '150 ANYS DE LA NOVA REFORMA DE 1866', the year of issuance '2016' and the name of the State of issuance 'ANDORRA'. This commemorative coin celebrates the 150 years of the New Reform Decree, one of the biggest steps on the Andorran and on the Consell General (Andorran Parliament) history, which represented a social and political transformation in the Principality of Andorra. The coin's outer ring depicts the 12 stars of the European flag.