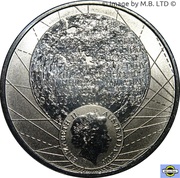 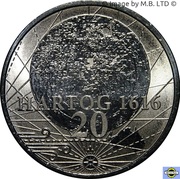 Small version of the 4th portrait of Queen Elizabeth II facing right wearing the Girls of Great Britain and Ireland Tiara set below a depiction of a pewter plate with Dutch words on it.

Depiction of a pewter plate with Dutch writing on it set upon a globe of the world with the outline of Australia to the bottom right.

Released by the RAM to commemorate the landfall on the west coast of Australia on 25th October 1616 by the Dutch explorer Dirk Hartog. The coin was released in a large coincard and it has a frosted uncirculated finish.

Dirk Hartog made landfall on the west coast of Australia aboard the Eendracht 400 years ago. As the first European visitors to Australia to mark their arrival, the crew left behind a pewter plate inscribed with details of their visit and onward journey. Based on the original Hartog plate from the Rijksmuseum in Amsterdam, this faithful coin design is symbolic of European-Australian shared histories, and represents your chance to own another chapter in the story of Australia and the VOC (Dutch East India Co.).