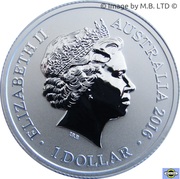 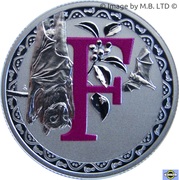 The Letter F Coin features Australia’s largest bat, the grey-headed Flying Fox, in its natural habitat playfully interacting with the letter "F" encircled by eighteen footprints.
A Fly and Feather can be found on the reverse.