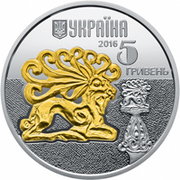 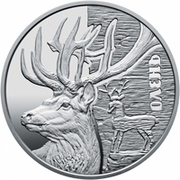 Fauna in Cultural Monuments of Ukraine

Above is Ukraine's small coat of arms, the legend УКРАЇНА (Ukraine), the coin issue year 2016 and the coin face value 5/ ГРИВЕНЬ (5/hryvnias); in the center is a gilt fragment of a Scythian pommel shaped as a conventionalized deer that comes from the Thick Grave (Tovsta Mohyla) (4th century B.C.). Near the fragment is an image of the pommel it comes from.

There is an image of a deer (to the left) against the background of a relief that comes from the village of Busha and features a deer, and the vertical legend ОЛЕНЬ (deer). The relief was discovered by Volodymyr Antonovych, a prominent Ukrainian historian, in the village of Busha, Yampil region, Vinnytsia oblast, in the latter half of the 19th century.

This coin celebrates the deer and its representations, which symbolized its power, speed, and untamed spirit. These representations are found in cultural monuments from various epochs. One of the periods includes the period when the Scythians, who left behind a great legacy, flourished on the Ukrainian steppe. Representations of the deer have also been found in works that are masterpieces of human genius, but whose age and origin have remained unclear for centuries.

Members from this site want to exchange it: MAG-903, raric

Bullion value: USD 12.17 Search tips
This value is given for information purpose only. It is based on a price of silver at 777 USD/kg. Numista does not buy or sell coins or metal.