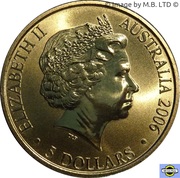 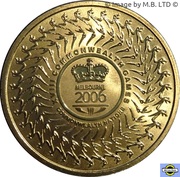 This NCLT Aluminium-bronze $5 coin was minted by the RAM in 2006 to celebrate the holding of the XVII Commonwealth games in Melbourne that year. The reverse of the coin displays the graceful and attractive figures representing both the spirit and sports of the games. These figures are repeated 71 times to represent the 71 competing nations and surround the Commonwealth Crown and Melbourne 2006 Games logo.

The coin was released in three different ways as follows ....
In a Coincard - mintage 9,100 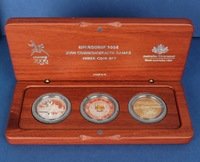 Sixteen NCLT 50 Cent coins to celebrate the Games were released in coincards, plus a NCLT $1 coin and another different $5 coin.