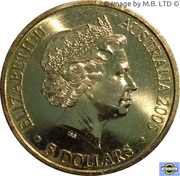 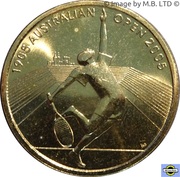 Tennis Player at the point of serving the ball, angled lines surrounding to represent the tennis court, city buildings in the background, dates above.

This NCLT $5 Aluminium-bronze coin was minted in 2005 by the RAM and celebrates 100 years of the Australian Open Tennis Tournament. It was only issued in a PNC by Australia Post.

A member of this site wants to exchange it: lena1975