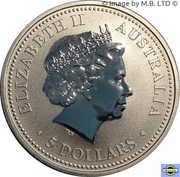 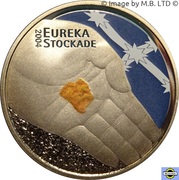 Depiction of a hand holding a Gold Nugget.
The blue with white cross and stars Eureka Flag in the background

This NCLT Copper-nickel $5 coin was minted by the Perth Mint in 2004 and released in an Australia Post PNC. It commemorates the 150th anniversary of the Eureka Stockade.
Front of PNC

The Eureka Rebellion in 1854 was a rebellion of gold miners of Ballarat, Victoria, Australia, who revolted against the colonial authority of the United Kingdom. The Battle of the Eureka Stockade, by which the rebellion is popularly known, was fought between miners and the Colonial forces of Australia on 3 December 1854 at Eureka Lead and named for the stockade structure erected by miners during the conflict.

The rebellion lasted for less than half an hour and resulted in the deaths of at least 27 people, the majority of whom were rebels. The event was the culmination of a period of civil disobedience in the Ballarat region during the Victorian gold rush with miners objecting to the expense of a miner's licence, taxation via the licence without representation and the actions of the government, the police and military.

Mass public support for the captured rebels in the colony's capital of Melbourne when they were placed on trial resulted in the introduction of the Electoral Act 1856, which mandated full white male suffrage for elections for the lower house in the Victorian parliament, the second instituted political democracy in Australia. As such, the Eureka Rebellion is controversially identified with the birth of democracy in Australia and interpreted by some as a political revolt.