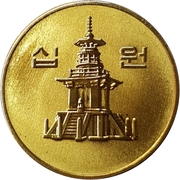 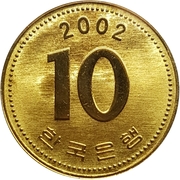 Dabotap Pagoda, located in Gyeongju, it is one of the national treasures dividing the value in Hangul on both sides

Value and "Bank of Korea" in Hangul

It is a bit hard (The DaeGwangSa catalog and most Korean numismatists don't distinguish a separate variety). Apart from the value digits, a difference is seen also in "9" digits of the year to make it a bit easier.