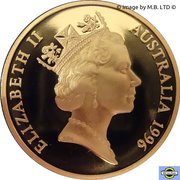 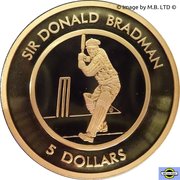 In an inner circle the depiction of Sir Donald Bradman at the crease in characteristic pose preparing to drive through the offside. Cricket wickets in the background.

This NCLT Aluminium-bronze proof coin was released by the RAM in 1996 as a tribute to Sir Donald Bradman. It was issued in a capsule inside a plush green case that was inside a cardboard box. It came with a numbered certificate of authenticity. 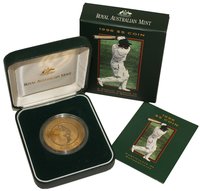 For decades Australians have enjoyed international recognition for achievements in sport. None more so than Sir Donald Bradman. Born in Cootamundra in 1908 and raised in Bowral, "The Don" is acknowledged as the greatest cricketer to ever play the game, and one of Australia's most respected sportsmen. Blessed with an unerring hand and eye coordination, his unwavering concentration was developed as a youth by hitting a golf ball with a stump in the backyard of his family home in Bowral. Debuting for NSW in the 1927-1927 season Sir Donald amassed 28,067 runs in first class matches including 117 hundreds. On average he made a century every third visit to the crease. His teat batting average of 99.94, established over a Test career of twenty years and 52 Tests stands not only as a record unlikely to ever be surpassed but as testimony to his pre-eminent standing in the game.