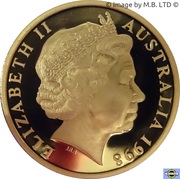 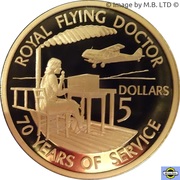 This NCLT Aluminium-bronze proof coin was released by the RAM in 1996 to commemorate 70 Years of the Royal Flying Doctor Service in Australia. It was issued in a capsule inside a plush brown case that was placed inside a cardboard box. it came with a numbered certificate of Authenticity.

The RFDS commenced in Cloncurry, Queensland in 1928 . Until early in the 20th century, sickness and injury were among the worst fears of the hardy souls who lived and worked in Australia's outback. Medical attention was either out of reach or a long and arduous ride away. In 1928, after much initial opposition, the Reverend John Flynn succeeded in his quest to establish the Arial Medical service, later to become the Flying Doctor Service and, with its Royal charter in 1955, the Royal Flying Doctor service. The "Flying Doctors" of today service a huge area and sparse population, making its efficiency unique among the world's arial medical providers. Seventeen bases across Australia provide 80% of the Australian Continent, around 7.1 million square kilometres, with much needed medical care. The 82 flights and 32,500 kilometres travelled every single day are testimony to the dedication of the staff of the Royal Flying Doctor service.

A different design Bi-metal  $5 coin also commemorating 70 years of the RFDS was released in a coincard.