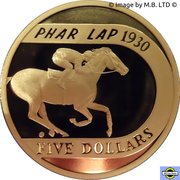 Depiction of Phar Lap with Jockey in racing pose placed within a representation of part of a horse racecourse.

This NCLT Aluminium-bronze proof coin was released by the RAM in 2000 to commemorate 70 years since Phar Lap won the Melbourne Cup in 1930. It was issued in a capsule in a plush case inside a cardboard box with certificate.

The name Phar Lap, forever etched in Australian History, is known by racing fans the world over. Yet, this magnificent story of triumph began without a notion of the fame and tragedy that would follow.
Struggling Sydney trainer Harry Telford  saw potential in an ungainly colt from New Zealand and despite criticism from his peers he was determined to achieve success. Even the name Phar Lap, which is the Thai phrase for "Lightning", was testimony to Telford's faith in the horse. After his first and many subsequent victories in late 1929 and 1930 Phar Lap became known as the Red Terror by the thousands of unemployed who relied on him to boost their morale during the heartbreaking depression. Bookmakers were losing money with each Phar lap win. Amazingly shots were fired at him on an early spring morning in 1930, he was uninjured and won the Melbourne stakes later that day. Shortly after that he won the 1930 Melbourne Cup which engulfed the country in Phar Lap euphoria.

In 1932 Phar Lap was sent to conquer the world when he went to Mexico where he would run in the world's richest horse race, the Agua Caliente Handicap with stakes of $50,000. Phar Lap carried an injury into the race but continued to defy the odds by winning the race in record time. Sadly Phar Lap died on 5th April 1932 while resting in California, only sixteen days after his last triumph. Controversy marred the passing of the Australian Icon as various theories developed trying to explain his death. While the true cause of his death could never be established his record provides undeniable proof of his greatness, 37 wins from 51 starts and winnings the third highest in the world at that time.