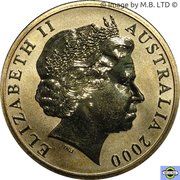 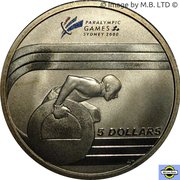 Paralympic athlete in a representation of a wheelchair leaning forwards to signify fast motion.
Pad printed in colour above is the Paralympic Games Logo.

This NCLT Aluminium-bronze specially produced coin is a result of a collaboration between the RAM and the Perth Mint. It celebrates the holding of the Paralympic games in Sydney between 18-29 October 2000.

This coin complements the 28 NCLT $5 coins produced in the same year to celebrate the Sydney 2000 Olympics but has a much lower mintage and is therefore rarer and more valuable.