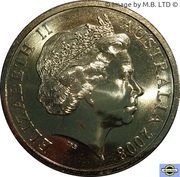 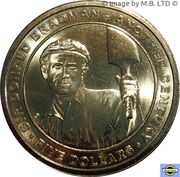 100th Anniversary of the Birth of Sir Donald Bradman

Depiction of Sir Donald Bradman giving his customary salute to the crowd after scoring yet again another century.

This NCLT Aluminium-bronze uncirculated finish coin was released in a coincard by the RAM in 2008 to commemorate the 100th Anniversary of the birth of Sir Donald Bradman. 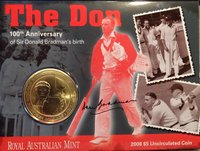 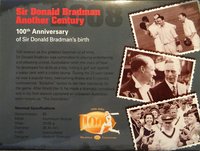 Still revered as the greatest cricket batsman of all time, Sir Donald Bradman was committed to playing entertaining and attacking cricket. Australians relish the story of how he developed his skills as a boy, hitting a golf ball against a water tank with a cricket stump. During his 20 year career he was a popular hero, overcoming illness and England's controversial "Bodyline" tactics to set new standards for the game. After World War II, he made a dramatic comeback and in his final season captained an unbeaten Australian team known as "The Invincibles".