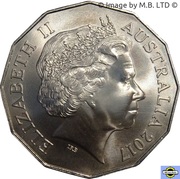 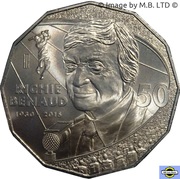 This NCLT coin was released by the RAM in 2016 (Although dated 2017) in a large coin card to commemorate the life of Richie Benaud, who was a popular, much respected and cherished Australian. It has a different finish to most 50 cent releases in that it is almost silver like.

Richie combined an outstanding record as a cricketer with a long and successful career as a respected commentator. As a cricketer he was devoted to attacking play - a skilled leg-spin bowler and hard-hitting lower order batsman. Richie was the first player to achieve "The Double" of 200 wickets/2000 runs in test cricket. As Australian captain he never lost a series.

Richie was a favourite commentator to many in Australia and Britain. He first commentated for BBC radio in 1960, and then moved to television. In Australia, he led the Nine Network commentary team for more than 35 years, becoming the "voice of cricket".

A member of this site wants to exchange it: Zameer