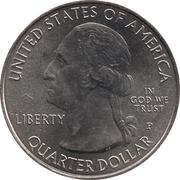 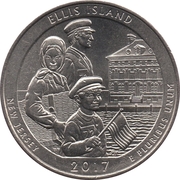 The portrait in left profile of George Washington, the first President of the United States from 1789 to 1797, is accompanied with the motto "IN GOD WE TRUST" and the lettering "LIBERTY" surrounded with the denomination and the inscription "UNITED STATES OF AMERICA

Translation:
Ellis Island
BF PH
New Jersey 2017 Out of Many, One

Ellis Island is located in Upper New York Bay, and is in both the states of New York and New Jersey.