This message aims at: requesting the creation or the modification of a ruling authority

I don't think India needs a Dominion of India sub category. Unlike Pakistan which had the British Dominion status from it's independence in 1947 untill 1956, when they adopted a republican constitution, India was a dominion from August 15, 1947 upto January 26, 1950. Also, the dominion of India has only political and no numismatic significance as no coins or banknotes were issued during this time period.

The coins and banknotes that circulated during this time period were those of the former India- British colony. This circulation of British indian colonial currency during the dominion status of India is called as the frozen series. The term "frozen" signifies how the minting/printing of currency and coins were frozen during the dominion period. Dominion of Pakistan on the other hand, had minted and printed their currency during their period of dominion status- infact the only currency I've from Pakistan is a 1948 1 Rupee, from the dominion period (1947-1956).

Of course, the reverse designs were not adopted for various reasons - but the obverse design was used on the 1950 - 56 pre-decimal coins of the Republic of India, which is the Asokan Capital with 'GOVERNMENT OF INDIA' surrounding it.

both of which we list as commencing production in 1949. There may be others, as dating Indian banknotes is difficult when all you have to go on is the Governor's signature. Of course, if you have information which proves these were not issued until 1950, please provide it so we can correct our catalogue.
Numista referee for banknotes from Ireland, Northern Ireland & Scotland.
BCNumismatics
Joined: 24-Jan-2009
Posts: 1852
Posted: 30-May-2020, 11:26 am
Posted: 30-May-2020, 11:26 am
Sir C.D. Deshmukh retired as Governor of the Reserve Bank of India in 1949, having served from 1943.

I've looked up the KM catalog.
for the coins:

During the dominion status, no coins were issued for general circulation. Also there are no government records to back the pattern coinage as suggested by Adian above (even wiki says so). However, there are unofficial sources which say otherwise. There are (unconfirmed) reports to suggest that pattern coins may have been stuck, with many such being sold. Whether they are real or not is debatable in the current absence of government records to support the claims. I've found this thread at worldofcoins, the closest to the current discussion. Hope this helps. 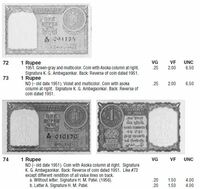 As for the P#37, the ones bearing the signature of C. D. Deshmukh, appear to be from the Dominion (given India became a republic in 1950 and Sir Deshmukh retired as the Gov, RBI in 1949). 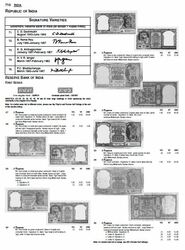 These banknotes were quite scarce in supply, and formed a miniscule with the India- British notes forming the greater majority of the bulk of the circulating currency. As of now these seem to be the only banknotes from the Dominion of India.