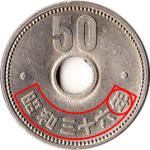 Year on Japanese coins is the the year of the current emperor's reign followed by his name.
You'll find the year by locating the 年 character which means "year". Over the years, writing direction changed. Hence, the 年 character is left of year on older coins, right on the date on recent coins.

How to read a Japanese date

The date lettering usually uses the following scheme: [Emperor name] [Year number] 年. In order to convert to Gregorian year, you need to add the year number to the year before he was enthroned.

Here is the Japanese figure table:
Numbers greater than 9 write as follow: [tens figure] 十 [unit figure]. If the unit figure is 0, it is not written. Same for the tens figure when its value is 1.
Examples
Be careful, with older coins (年 left of the date), you must read right to left. For example, 五十二 reads 25.