The Republic of Estonia (Estonian: Eesti Vabariik) is a small Baltic country located in Eastern Europe. With a low population of 1.3 million, the former Soviet Republic that gained its independence on August 21st 1991 is now one of the fastest growing European countries. It has a high Human Development Index, Democratic government and is a member of both NATO and the UN. The capital city is Tallinn.

Although it has a long history reaching back to the 10th century AD (CE), the nation has only had one previous (pre 1991) period of Independence. This brief period began on February 24th, 1918 when Estonia declared independence from the Russian Empire. At that time, the First World War was in progress, and Estonia needed a currency of its own. Foreign currencies such as German Marks, Reichsmarks, Russian banknotes, Roubles and Finnish Marks made up most of the circulating currency. Estonia's independence lasted for barely 22 years before its annexation by Soviet Russia in 1939 under the Molotov-Ribbentrop pact with Nazi Germany.

Estonia was numerously conquered over the centuries, thus there were many different coins used and minted throughout the ages, including some minted in Tallinn (Reval) and Tartu (Dorpat).

It was decided to adopt the 'Estonian Mark' as official currency, a decision demanded by the German occupational authorities. 11 different Mark/Marka coins were issued between 1922 and 1928, but only 10 circulated: 1 Mark, 3, 5 and 10 Marka.

In 1926, almost all of that years' 10 Marka coins were melted before they came into circulation.

The value of the Mark was dropping fast, and to stop the rising inflation it was decided to create a new currency, launched January 1st 1928. The Kroon (derived from the Swedish Koruna) replaced the Mark at a rate of 100 Marka for 1 Kroon. The Kroon was pegged directly to gold at a rate of 2480 Kroon for one kilogram of pure gold. It also stayed close to the British pound until the recession of 1933, after which one pound became equal to 18 Kroon. A total of 12 coins were issued: 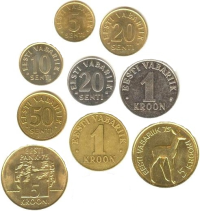 
As soon as it gained independence, Estonia was in a hurry to get back on its feet. It quickly issued coins, all with the country's coat of arms (three lions) on the obverse. Minted in Tallinn, Rahapaja OY in Finland, and South Africa, six types were made:

In addition to these coins, the bank of Estonia (Eesti Pank) has made many commemorative Silver, Platinum and Gold coins, many of which are on Numista and all of which can be found view on the Bank of Estonia website.
The coin shown in the right is the 2010 Estonian 10 Krooni coin commemorating the Vancouver Olympics. Estonia has a habit of issuing a coin for each olympic games since 1992.

In 2011, Estonia adopted the Euro as its official currency, but has continued to issue commemorative coins in Silver and Gold.

The coat of arms of Estonia depicts a golden shield, which includes three slim blue passant gardant lions with red tongues in the middle and golden oak branches along both sides of the shield. The lesser coat of arms lacks these oak branches. The three lions derive from the arms of Danish king Valdemar II who had conquered northern Estonia in 1219. 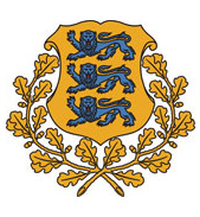