Republic of Finland (in Finnish: Suomen tasavalta) is the 8th largest country in Europe even though it has population of only 5 million. It has been independent since the declaration on 1917, December 6th which was followed by a bloody civil war. 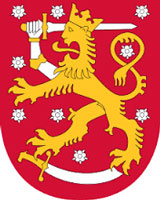 For hundreds of years Finland was split between Grand Duchy of Moscow and the Swedish Empire until during the napoleonic wars Tsar Alexander I conquered it and declared an autonomous duchy in 1809 under his own authority as Grand Duke of Finland.

In the early days of currency, squirrel pelts were used widely across the region. Roman and byzantine coins were also used and later Vikings brought many different European coins to the region which they traded for various goods.

First Finnish minted coins date back to the bronze age (1500-500 BC). These coins were copies of Byzantine silver coins.

Since 1809 both Swedish (some swedish banknotes even had Finnish text on them even though Finnish has never been widely spoken in Sweden) and Russian currency were used in Finland until in 1860 Finland adopted its own currency, the Finnish Markka.

A contest was held to choose a name for the new currency, including names such as sataikko, äyri, sampo, muru, suomo and rahtu but markka was the most popular name.

Finnish markka was bound to Russian rouble with exchange rate of 1 FIM = 1/4 RUB.

In 1878 Finland joined the Latin Monetary Union and released gold coins into circulation with denominations of 10 and 20 markka. Following the declaration of independence, Finland re-adopted the gold standard in 1925 even though gold coins didn't circulate.

In 1963 Finland had a monetary reformation as a result of high inflation caused by World War II. Two zeroes were removed from Finnish coins and banknotes but the designs remained the same with very little changes.

On 1999, January 1st Finland adopted the Euro as its official currency. Markka and Euro circulated alongside each other for a few years until 2002, January 28th when Euro became the sole currency.