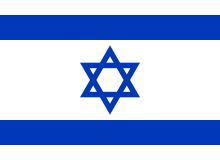 The Israeli Declaration of Independence was proclaimed on 14 of May 1948 (5 Iyar 5708) on the eve of the termination of the British Mandate for Palestine with Israel becoming an independent sate. The State of Israel was voted in as a full member of the United Nations on 11 May 1949. Before Independence in 1948 the British authority issued a series of coins for the British Mandate for Palestine. Over the years Israel has changed currencies four times.

The Emblem of the State of Israel (Hebrew: סמל מדינת ישראל) shows a menorah surrounded by an olive branch on each side, and the writing "ישראל" (Hebrew for Israel) below it. Most commonly light blue and white, the coat of arms does appear in different colour combinations depending on the use.

In 1920 the United Kingdom was granted a League of Nations mandate over Palestine. In 1927 they introduced the Palestine Pound. Unlike the British Pound, the Palestinian Pound was decimal, divided into 1000 mils. The Palestine pound was used in British Palestine until the end of the mandate in 1948.

Israel then adopted and used the Palestine Pound from 1948 to 23 June 1952 where it was replaced by the Israeli Pound/Lira. Israel also changed the name Mil to Prutah during 1949.

In the 1960's, a debate began brewing over the fact that the currency of Israel did not have a distinctly Hebrew name. In 1980, the Bank of Israel finally realized this, and they introduced the Israeli Shekel/Sheqel at the rate of 10 Lirot = 1 Sheqel (שקל). The Shekel/Sheqel was also divided into 100 New Agorot (singular: New Agora). This currency didn't last long, and was replaced, in 1985, by the New Israeli Sheqel at the rate of 1000 for 1 due to inflation.

Judea and the ancient Land of Israel

During the Kingdom of Judah (930-586BC) bronze currency rings of varying weights and small silver bits and ingots were issued to facilitate trade. The silver bits and ingot are known as Hacksilber and were in the denomination of the Gerah where 20 Gerahim (Gerah) = 1 Shekel.

Again during the Macedonian Period (333 BCE-302 BCE) and the Ptolemaic Period (302 BC-260 BC) the Ma'ah-Obol was used as the denomination for all coins struck by the Judeans in Jerusalem.

Coins were also Issued during the Hasmonean Dynasty and Kingdom from around 140 BCE-37 BCE. The coins were struck in the denomination of the Prutah.

The Herodian Dynasty (37 BCE-95 CE) also struck coins in the denomination of the Prutah as well as other unidentified units.

The Roman Prefects and Procurators issued their own Prutah coinage.

During the First Jewish-Roman War (66-70) also know as the Great Revolt, the Jewish rebels issued bronze Prutah coins and silver Shekel and Half Shekel coins where 256 Prutot (Prutah) = 1 Shekel.

From here on throughout the Roman, Byzantine and Islamic periods local city coins were struck and issued. By the time of the Ottoman period, coins were no longer being struck in the area except for a few local Jewish issued tokens during the late Ottoman period and during the British period.

From 1948 onwards, Israel issued coins in lieu of Palestine. Most Israeli coins continue to dwell heavily on the past, using many Judean coin designs. Most coins of Israel are in Art Deco style, even though most countries have abandoned Art Deco coins. They also use many designs important to the Jewish people and identity.

You may find a tool to help you with Hebrew calendar here within the Numisdoc section Dates & calendars.