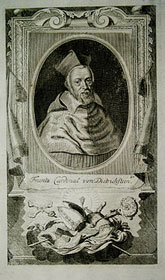 Mikulov (in German, Nikolsburg) mint was established by Cardinal Franz von Dietrichstein, the bishop of Olomouc, in 1624. While Franz von Dietriechstein minted also his own coins from 1613 in Kroměříž (Kremsier), in Brno and in Olomouc, mint of Mikulov was established as government mint as Dietriechstein held Mikulov castle. Thus it minted coins with name of Ferdinand II.

Mint was officially opened on 1627, June 22nd with accessories taken from Olomouc mint and dies from Brno mint.

While it is probable that mintmasters from Brno and/or Olomouc were taking part in mint operations, no evidence of this assumption was ever found.

Mint only operated for two years, from 1627 until the end of 1628, when government mint was moved to Olomouc.