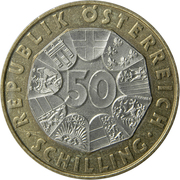 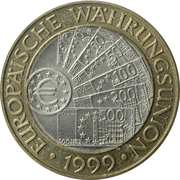 Shows the standard design of the face value “50” encircled by the coats-of-arms of the federal provinces of Austria and the name “Republik Österreich”.

On 5th May, 1999, the Austrian Mint in Vienna issued a bi-metallic circulation 50 Schilling coin to commemorate the beginning of the European Monetary Union. It chose as its attractive design the new banknotes fanned out from the “E” symbol for the Euro, surrounded by the stars of Europe. The inscription reads: Europäische Währungsunion 1999 (European Monetary Union 1999).