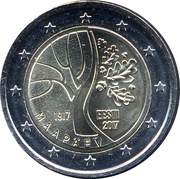 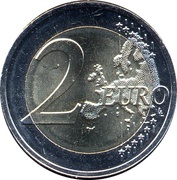 The sinuous trunk of an oak tree in the center with branches, which symbolize the time of revolutions and hardships from which the road to Estonia's Independence was paved, to the left and leaves, which symbolize the strength, achievements, and longevity of Estonia, to the right. At the bottom left side of the trunk there is the word ‘MAAPÄEV’ (Provisional Assembly of Estonia) and above that the year ‘1917’. At the bottom right side, there is the name of the issuing country ‘EESTI’ and below that the year of issuance ‘2017’. The coin’s outer ring bears the 12 stars of the European Union.