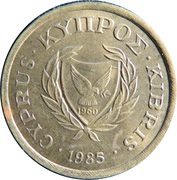 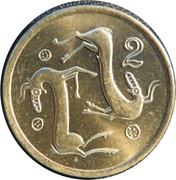 Depicts two heraldically arranged goats taken from a shallow bowl of the mid - thirteen century B.C. The value 2 above to right. One circle with 4 dots inside and two circles with 6 dots.