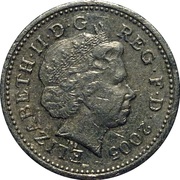 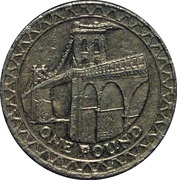 A representation of the Menai Bridge inside a border of railings and stanchions.

Reeded with a decorative pattern symbolising bridges and pathways

Representing Wales the Menai Suspension Bridge (Welsh: Pont Grog y Borth) is a suspension bridge that carries road traffic between the island of Anglesey and the mainland of Wales. The bridge was opened on 30 January 1826 and on 28 February 2005 the bridge was promoted to UNESCO as a candidate World Heritage Site.
(former Spink ref. 4596)