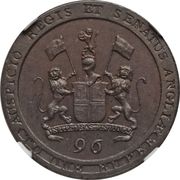 Translation: By the authority of the King and Parliament of England

Balemark of the Company surrounded by a broad flat rim. On the rim is the incuse legend: United East India Company 1794