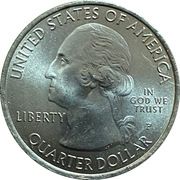 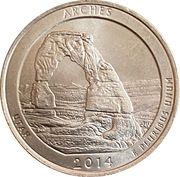 Delicate Arch, a 65-foot freestanding natural arch. It is a widely recognizable landmark in Utah and the most famous arch found in the park. It has been depicted on postage stamps and license plates. The Olympic torch relay for the 2002 Winter Olympics passed through this arch. The La Sal Mountains are visible in the background.

Translation:
Arches
DW CLV
Utah 2014 Out of Many, One