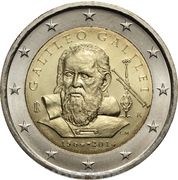 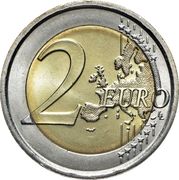 450th Anniversary of the Birth of Galileo Galilei

The design shows the head of Galileo Galilei from the painting of Justus Sustermans, 1636 (Florence, Galleria degli Uffizi); around, upside, GALILEO GALILEI; on the right, superimposed letters R (monogram of the Mint of Rome)/astronomic telescope/C.M. (monogram of the Author Claudia Momoni); on the left, superimposed letters of the Italian Republic monogram ‘RI’; in exergue 1564-2014. The coin’s outer ring bears the 12 stars of the European Union.